The waterline rises, & a siren
jolts the neighborhood awake

with its howling. The sun is still
crying, hasn’t stopped in days,

you wonder if something broke
its heart—perhaps the moon,

you know she is always leaving,
always promising to return

but maybe this time
her departure was too much

so the sky weeps fat tears
of loss. A man pounds on

our doors, crying out Danger!
Danger! The ground is full

& overflowing! The creek is swollen,
begging to burst, he hammers

desperate & terrified, & we are
all scared or asleep or standing still,

our shoulders heavy with shock
dredged like mud from the storm.

WILLIAM JAMES is a poet, punk rocker, and train enthusiast from Manchester, NH. He has featured or competed at poetry slams, readings, music venues, and basements in almost every state east of the Mississippi, touring both as a solo artist and in support of musical acts ranging from hardcore bands to folk singers.
He’s a contributing editor for Drunk In A Midnight Choir, a facilitator with the Slam Free Or Die writing workshop, and a frequent host at the weekly Slam Free Or Die reading in Manchester. Various works have appeared or are forthcoming in SOFTBLOW, the Emerson Review, Atticus Review, Word Riot, and Radius Lit. His debut full-length poetry collection “rebel hearts & restless ghosts” is forthcoming in 2015 from Timber Mouse Publishing. 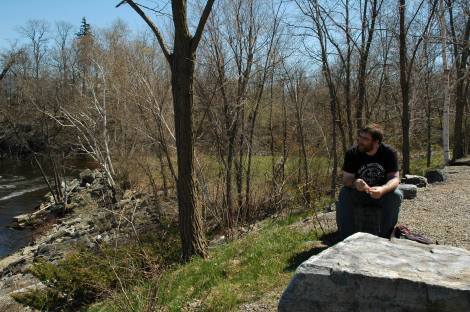