My father and I stand on either side of the splintering kitchen table,
hurling words like missiles,
my grandmother, the no man’s land between us.

I picture her, nine years old
hustled out the back door with a kiss from her mother
and a bag of family photos and gold jewelry
when fists threatened to barge through the front.

Like the city she never had the chance to grow up in,

her family name was butchered
from Alexandrovich to Alexander
like tongue ripped from mouth.

I am legacy.
This is my Jewish identity:

grandfather falling asleep in temple twice a year
Kugel on holidays, but not knowing
how to spell kugel
my dad’s hand-me-down fear
of throwing things away,
making a tattoo appointment and picturing the number
on my great-grandmother’s forearm,
lying in bed next to my Palestinian partner,
the disdain in my father’s voice
threatening to make rubble of my love.

I am legacy,
but I am not birthright, not blood relation to that land.

My family sees Judaism as Zionism,
calls bombs self-defense from 6,000 miles away
while state-sanctioned violence is shoved behind slaughterhouse doors.
They cling so tightly to their heritage,
but do not see the ones who have roots in that land.
They say Israel would stop if it could,
use outdated beliefs as excuse for violence,
but their lover’s face is not painted on every target.
They are not baggy eyes from sirens outside bedroom window.

This is my Jewish identity.
Unclaimed.

Potted on stolen soil
a flower with no roots
just a pretty thing covering up truth
just something to soak up all the blood.

In the crossfire of this kitchen,
I wonder what my grandmother,
who knew persecution like the skin of her palms,
would think of her head-strong granddaughter,
refusing to hold her tongue at the dinner table.

When I Call Myself Survivor

It’s Sunday morning and my uncle is telling me about the “levels” of assault,
How it’s wrong, but a girl should not be able to have sex, regret it, and cry wolf;
How she should have expected that grab when picking out her skirt.
And he doesn’t know that
His voice is the one inside my head whenever I try to write this poem.
I fight until my body is earthquake against everything he believes,
But will not call myself survivor.
Do not feel the right to my history.
The 15-year-old girl I once was shrinks into her corner,
As I think of my first boyfriend.

The boy was quiet and safe, until he wasn’t.
When I left, he yelled at me for wasting his time,
And I learned my body’s worth based on what he wanted from it.

And I still don’t know if I’m a survivor.
There was no scream, no protest, no force. Just a 15-year-old girl,
Backstage in an empty theatre

The whole of me, quiet wait
Stomach churning,
Surprised he couldn’t hear the avalanche in my head,
I said, hold on.
It was all I could manage.
It was not stop, not afraid.
Violence did not live in his fists.
It was not no, but it was there,

And maybe he didn’t hear me.
I did not think to yell,
Did not recognize this in my shallow understanding of consent,
Had not been taught of lack of consent in the absence of violence.
This was no alley.
He was no stranger.
I was not pinned down,
Could’ve run,
But there was no reason to.

I didn’t know the smart words yet.
The 4-year-old in me kicked,
My voice, dead-
Weight
Up against so much
Silence.

I said wait, and he kissed me
Hard,
Until there was only the sound of his breath in my ear.

But I am 20 now, not trapped under the weight
Of a boy I need to love me.
I am in the kitchen
With an uncle who tells me
I have no right to this trauma
And I want to explain how destructive it is to paint dark alley and screams,
Over every statistic,
To tell those who did not know they could say no,
Who were silent or scared,
That they are to blame,
That their stories are not theirs.
I want desperately to make him understand
But in my family of lawyers,
the emotion gripping my throat in debate
is weakness, Not trauma.
And he does not know.

Amanda Saunders is a writer, sea glass collector, and ex-figure skater from Boston. She currently attends Emerson College and hopes to soon be promoted to queen of the pixies. 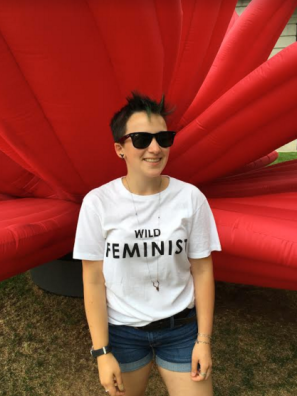