I grab the skin, pinch and release the mouth
(all skulls have one)—and my cousin grabs another skull—
there are at least twenty to choose from if you count his back
and we do—and then we start the conversation—
my cousin is Donald Duck at first, then switches to Phil Anselmo
of Pantera—I am Jay Leno and then Mike Tyson—
the skulls are so intense that it is funny—they scream and we scream
that we want more chocolate, more rocky road—the skulls scream
for marshmallows—my uncle says to stop, that it’s starting to hurt—
and we tell him that is not pain, that burning in hell with quarries
for eyes is torture—and my uncle says that we have skulls hidden
deep within us, that one day they will become tattoos, that death
is funny but then it arrives in its hot asphalt etcetera and then what
do you do?—we laugh—as the sun fades and the day becomes awe-
struck by night— 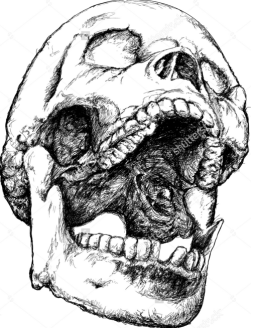