I cut my hair into the bathroom sink.
now the tiles are covered
in my own stubborn thread.

I burned bread in the bad frying pan, killed my cactus,
went back to middle school because I never learned
sixth grade algebra or maybe because there’s a me there

who needs advice like shaving your armpits
isn’t worth it, or it’s ok to feel like you don’t fit—
what I mean is I’m not good at this. I stayed up

all night again. my apartment was empty,
the preacher on the corner shouted lord lord lord
till he was hoarse. my god doesn’t exist in this language:

genderless molecules making and unmaking.
I like mistakes: they’re probably why most of us exist.
I said the words every day when I was 11:

My building is full of people who want to be left alone. My bedroom window faces someone else’s window and when they leave their light on my room stays bright. I keep the curtains drawn because I don’t want them to see me undress. Another neighbor coughs so loud the wall vibrates. I hear another one walking up the stairs with his cane, and someone else practicing cello. Only the oldest residents speak to each other. Mysterious cables connect our building to all the others that share the alley. They rattle when the wind comes in too hard.

When we were kids, I imagined our buildings tethered together with a string of yarn. We never did because it would have required physics and perfect aim. I like the word landline because it shouldn’t have anything to do with telephones. A landline is a reminder of earth. Now everything I say goes to right to space. I’ve lived my whole life on stilts. I wonder what the ancient Russians would have thought about skyscrapers. What kind of house did Baba Yaga move into once her chicken-footed house became too small?

I lived in the ground once: when I was eight, we lived in a different language, in an apartment that had a bomb shelter leftover from the wars. The bomb shelter was where my brother and I slept. The home for the aged had windows that faced our yard, and when the power went out their lights always stayed on, making the yard a dull yellow. The yard was filled with trash: wires and weeds and junk. We had a rusty swing-set frame, but I don’t remember any swings. The month before we moved back to America, the landlord hired someone to come and clear it all away. Then the yard was full of flowers and red dirt and gentle snakes. It was still our yard but it wasn’t the one we’d lived with that whole year—it was a new place.

I’m looking for an apartment in the city where I was born. I went away and came back, and while I was gone the city changed. Hundreds of apartments. Each one the same room with the doors and appliances rearranged. The real-estate agents must all be in cahoots, this all must be one enormous joke. I look at a grainy photograph where the kitchen window looks out into someone else’s apartment. I lean in close, and all the windows telescope, room after room, a line going through the world.

Sometimes you’re alone enough
the whole world looks like a ghost story.
Sometimes you pass an old apartment,
a place you used to live,
and don’t recognize anything
but the broken venetian blinds
your landlord never bothered to replace.
Home is enough walls if you are lucky,
a roof to keep you dry. When someone new moves in,
it’s another set of pictures taped to the wall,
another beat-up kettle heavy on the stove.
Wonder about every room you’ve slept in.
Wonder what of you the foundation has kept,
whether the cracks in the paint began to peel
in the first months you called those rooms yours,
when you already knew you would leave,
the way some kinds of death write themselves
into your cells the moment you are born.
But a rental is nothing like a body, except in how
it decays. How dust collects in the corners
and mice eat away at the plaster,
the old stripped wood. 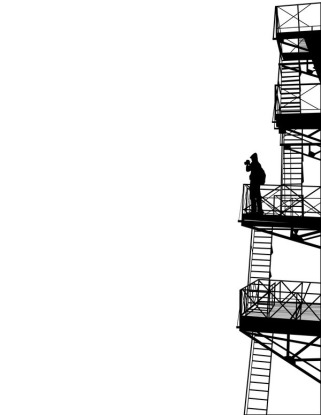 Sophia Holtz is a writer, performer, and sometimes-illustrator. She has featured i

n bars, colleges, and the occasional basement throughout the United States. Her work has appeared in decomP, H_NGM_N, glitterMOB, and other journals. She received her BA from Hampshire College, and is a Goldwater Writing Fellow at the NYU MFA program. Find her at sophiaholtz.com